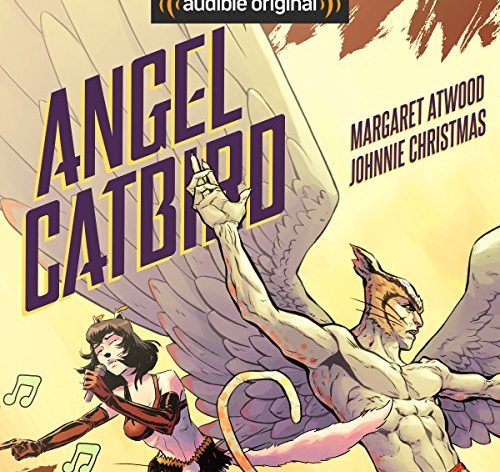 On February 13, 2018, Audible Studios will release the audiobook version of all three volumes of Margaret Atwood’s Angel Catbird graphic novels. Published in tandem with our campaign, this rousing adventure tale describes the exploits of a part man / part bird / part cat superhero. Born of the traditional superhero scientific-accident-gone-wrong, Angel Catbird is able to see both sides of the cat-bird dilemma.

The graphic novels are an homage to the golden age of comics, and so the audiobook is an homage to the radio dramas of the 1940s. Many of you may be too young to remember the campy style – or perhaps even radio dramas at all – but audiences of all ages will enjoy this hilarious, irreverent and cat-punny production.

Instead of the banners of information that appeared in the graphic novels, the audiobook features “jingles” to draw the listeners’ attention to the very real implications of the story. Come back to our blog February 13th to hear a ‘preview’ of a couple of the jingles.