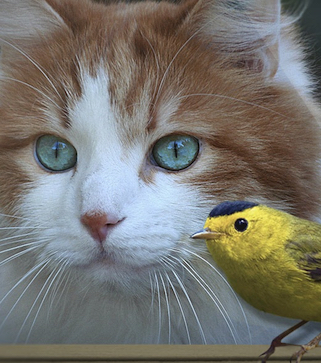 Does your municipality do an exceptional job of Keeping Cats Safe & Saving Bird Lives? If so, we’d like to hear about it!

The Safe Cats, Safe Birds Municipal Award was launched in 2017 by Nature Canada to showcase Canada’s most progressive municipalities and their leaders who, as stewards of their local environment, make an important contribution to bird conservation by adopting animal control bylaws that specifically address and humanely control cats, and the human-caused threat to birds they can present.

Municipalities from all regions of Canada, and of all sizes and shapes, are eligible. Nominations will be accepted from both individuals or organizations (including municipalities themselves) and should be sent to info@catsandbirds.ca.

The prize is awarded on the basis of merit on an irregular basis, so nominations can be made at any time.

The criteria for selecting the winner include:
• A bylaw that prohibits owners from allowing cats to roam outdoors
• A public communications effort in support of the bylaw
• A concerted effort to reduce the feral cat population

Read the press release announcing Calgary as the winner of the inaugural Award.

All submissions must include a completed Nomination Form as well as a copy of the relevant bylaw(s) for the nominated municipality. Nominations must be sent to info@catsandbirds.ca, or by mail to Nature Canada at the address below.