What about the Feral Cats? 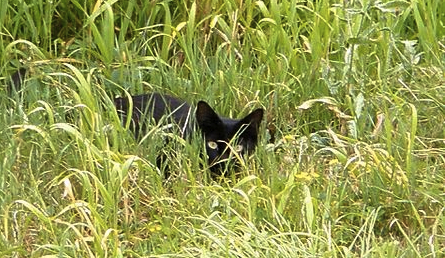 The size of the population of unowned cats, sometimes referred to as “community cats” or “feral cats”, is not well-understood. Environment Canada researcher Peter Blancher estimated Canada has somewhere between 1.2 and 4 million unowned cats, a population that includes both stray cats and feral cats. Cat-care organizations use the rule of thumb that the unowned cat population equals between 6 and 15% of the human population, which works out to 2.1 to 5.5 million.

Using the term “feral cats” to describe this population is not accurate, since the numbers include both stray cats and feral cats. Stray cats are pets that have gotten lost or been abandoned. Feral cats are cats have reverted to a wild state and their offspring. Some can be tamed, but many never get accustomed to human contact.

It is thought unowned cats kill more birds than pet cats, because they are outside 24/7, and because they hunt for sustenance. While unowned cats seem more like wildlife than they are like pet cats, they’re not wildlife — they’re an introduced species we abandoned to the wild, and they deserve humane treatment just like any other animal.

The first thing we need to do as a society is to limit the influx of new cats into the unowned population. Cats allowed to roam outdoors can interact with unowned cats in many ways, including sex. This is one of the reasons it’s important to fix your cat, even if you keep it safe from roaming. (Cats have been known to escape occasionally!) Some cat owners think it’s okay to let their cat breed because they can find homes for their cat’s kittens. But for every kitten that does find a home, the pet that could have been adopted from a shelter risks being euthanized because no home could be found. It’s also why it’s important to permanently identify your cat — it vastly improves the chances of them being returned home if they do escape and get lost.

Another way of helping the situation is to encourage anybody who wants a new cat to adopt them from a shelter. Getting your new cat from a shelter, SPCA or humane society (rather than a neighbour or a personal ad) helps since it supports the system of organizations that work with stray and feral cats. Almost all Humane Societies and SPCAs in Canada sterilize animals before adopting them out to their new families. The added bonus is that you can often adopt a cat that is already fixed and has all of its shots for a small fraction of what it would cost to get your new pet fixed at a vet!

The third thing we need to do is figure out how to eliminate the reprehensible practice of cat abandonment. While it is a crime to abandon an animal in Canada (failure to provide the necessities of life, Criminal Code of Canada), it seems rarely prosecuted, and far too common.

All of the above are essential to limiting the future population of unowned cats, which is why we are joining the chorus of cat-care organizations working to inform the public about the importance of keeping their cats from roaming unsupervised, and the tragic consequences of abandonment and failing to spay/neuter cats.

But what about the current population of unowned cats?

Our concern for cats is sincere, so we do not advocate for euthanasia as a means of cat population control. But we are equally sincere in our concern for birds, and need to offer them protection as well. The estimates of bird deaths in Canada from cat predation are shockingly high – between 2 and 7 percent of all birds in southern Canada are estimated to fall victim to (both owned and unowned) cats. We need to improve protection for our birds, especially those in habitats of particular importance.

Currently, most unowned cat-care takes the form of Trap, Neuter, Release (TNR) programs. Run by SPCAs, humane societies, other not-for-profit organizations or concerned individuals and supported by volunteers, these initiatives trap unowned cats and take them to be fixed (for example, though a municipal spay-neuter program) and vaccinated. The cats are vetted to find any that are or can be socialized (mostly the strays), and those are put up for adoption. The cats that can’t be adopted have a notch taken from their ear to mark them as neutered colony members, and are released back into the area they came from.

While there is debate about the efficacy of such programs, there really can be no question that neutering feral cats results in fewer feral kittens, or that getting strays into shelters helps both cats and birds. However, that doesn’t always equate to an overall reduction in the population. TNR programs need to be very intensive over an entire area in order to reduce the population size over time. At times, under-resourced volunteers struggle to cope with the volume of cats, identify newcomers, ensure that the colony is routinely vetted for cats that can be adopted, and neuter a sufficient proportion of the cats. (Studies have indicated that 75-90% of a cat colony has to be neutered to result in population decline.) Add to that the fact that some regions don’t have TNR programs at all, and those that are volunteer-run with little funding are unlikely to be able to serve all of our feral cats: there just aren’t enough resources or programs. Some communities have had great success permanently reducing free-roaming cat populations, while many others have limited resources and inadequate people-power to really tackle the scope of the problem.

While TNR programs provide care for feral cats, they aren’t generally able to heated shelter, and they can’t provide any immediate protection for birds. Those are two of the reasons we see enormous value in one of the variations on TNR, known as TNRRR or Trap, Neuter, Remove / Rehome / Relocate.

We don’t have all the answers, but it seems clear that a broad, collaborative approach is needed to effectively and humanely reduce feral cat populations, one that is intensive, has more resources and better structural support. We will work to advocate for increases in municipal and regional capacity to provide free spay/neuter services to feral cat programs, secure locations for TNRRR programs, and improved access to resources. We will pursue research that allows us to continually foster improvement in feral cat management and bird protection, informed by science. We invite cat-care organizations to join in a dialog about how to ensure the well-being of both cats and birds, in reflection of Canadians’ concern and respect for both pets and wildlife.

Tags: cats feral outdoor
Update: the Canadian Federation of Humane Societies has updated this report, issuing Cats in Canada 2017: A Five-Year Review of…
On May 18, the official Report on The State of North America’s Birds was released by Catherine McKenna, the federal…
This study by Environment Canada scientist Peter Blancher was designed to create a credible estimate of the rates of bird…