How cats are vulnerable to wildlife 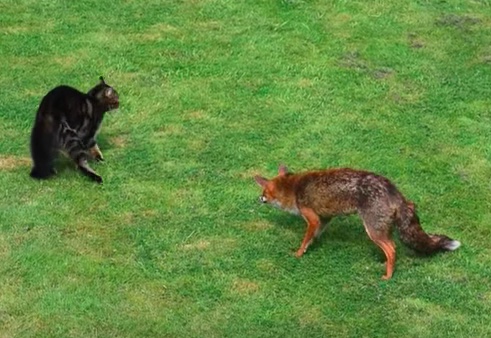 We hear a lot about how vulnerable birds are to cats, but we don’t often hear much about how cats are vulnerable to wildlife. There are lots of dangers for outdoor cats, including getting hit by cars and getting lost, diseases, pests, and parasites, as well as fights with other cats and wildlife. But the risks from wildlife aren’t limited to fights: they include disease transmission (ranging from rare to very common) and encounters with wildlife defence mechanisms, as well as predation.

An insurance company in the US, Veterinary Pet Insurance Co, released a top 10 list of wildlife that cause insurance claims. On the list are coyotes; raccoons; squirrels; snakes (only a concern in Ontario (Massassauga Rattler) and in BC, AB & SK (Prairie Rattler)); scorpions (in southern SK, AB & BC, home to the Northern or Boreal Scorpion); foxes; porcupines; groundhogs; skunks; and rats.

Wildlife aren’t vaccinated, of course, and most never see a veterinarian unless they end up in a rehabilitation centre. As a result, they’re much more likely to have diseases, pests and parasites. Here is a sampling of the ones that can be transmitted from wildlife to cats:

o Rabies: the primary carriers vary by region, but raccoons, foxes, skunks, coyotes and bats can all carry rabies. While most pets are protected by vaccination, some owners don’t vaccinate, vaccinations are not always kept up to date, and a small percentage of pets don’t become immune after vaccination.

o Leptospirosis is a serious bacterial disease that is increasing in frequency of infections, even in urban areas. It is transmitted in the urine of infected animals including rodents, raccoons and opossums.

o Giardia infection or giardisis, also known as beaver fever, is a parasite that causes diarrhea and can be difficult to get rid of. It spreads via cysts in feces, usually contracted via water source contaminated by infected beavers, coyotes, raccoons or rodents.

o Roundworms are an intestinal parasite are often transmitted to cats by rodents and birds, who can carry the cat version of the parasite, but are not themselves infected.

o Fleas: irritating and a mental health hazard for both pets and owners, and also vectors for Tape Worms.

Secondary poisoning can also be a concern if your cat eats mice or rats that have recently ingested poison. The level of toxicity depends on the timing, amount and type of poison the rodent has consumed and the number of rodents your pet eats.

Cats are vulnerable to wildlife, just as wildlife are vulnerable to cats. Neither are to blame for hunting, or defending themselves. It’s up to humans to ensure our pets are safe, and to ensure wildlife is safe from our pets. Keep pets and wildlife separate, for the benefit of both.